Google made a special feature for me !! 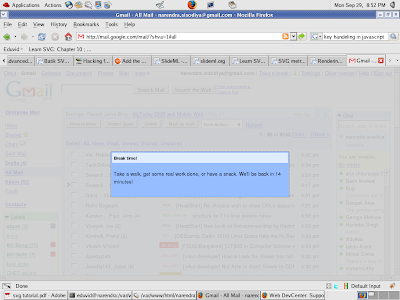 GMail has introduced an excellent feature for gmail addicted persons like me. "Break Time" see this
Posted by Narendra Sisodiya at 8:56 PM No comments:

Hi, This is a google based search web site-- umm they are calling it as finding engine
http://www.spific.com/

the logic is they are using "content of search"
So, If you are searching "Install linux "
You can give context as "How to" then all website which is bascially provide tutorial will be used for searching using google custom search engine
--- search using Spific -- (the finding engine)
Posted by Narendra Sisodiya at 2:18 PM No comments:

How to Install Yum on Redhat RHEL4

Apply these commands in terminal

Take a Coffee , It will take 5 - 10 minute. Also If you got any error then please try enabling or disabling the repo configuration inside /etc/yum.conf file

Email ThisBlogThis!Share to TwitterShare to FacebookShare to Pinterest
Labels: yum

Hi, just checked out this website -- it is great for schools administration --
http://richtech.ca/openadmin/index.html
Posted by Narendra Sisodiya at 1:30 AM No comments:

See it won't work,
I have observed this fact using FireBug Addon of firefox.
Posted by Narendra Sisodiya at 12:45 PM No comments:

> Again, I do not know, how much it is needed. Will is be benefical to have a
> repo at Delhi ?

It should be adding to the user experience when downloading Fedora from
India. So, if one were to look at setting up a Fedora mirror for the
public based out of North India, where should one start looking ?

Instead of repo , You can do something different..(I am already busy with many stuff, for next few month, it is not possible to start for me.)

instead of small small rpm, we separate them into some big chunk of bundle with added configuration, which can be indipedently install on a system without getting any dependency error.
For this we can start form LSB (linux standard base) and make bundle of rpm which are small small (`~~100 MB ) repository for single big software like (Xdisplay , open office , FireFox etc) with all added dependency's on it. So this will be much like distributing software specific small repo bundle which can be directly installed without worrying about any dependency's and somewhat similar to installing exe files. (just click and set the path of installtion)

However this approach will generate a lot of redundancy in term of space, But who cares, a 2GB software will take 10 GB or 20 GB but it will become a distributable unit much like old D:\Software directory , which was having all sort of pirated software (a gift of from my PC assembler at that time).

This sort of packaging is possible ,,,,
may be in near future in I will give a try to produce this sort of bundle so that /media/software drive will become transferable/shareable unit,

Recently I got a very useful website : http://www.killerstartups.com
Amazed to see this site : this contains all latest release of new startups with amazing ideas ,
just in a 2 days , it rocks me, I cannot believe that daily everyday such nice sites release

Are you still making presentation slides on OS-Software (like MS power point or OpenOfficeImpress ), Then forget it,
Here is http://280slides.com/ -- A web based online presentation making system . Here making slides it as easier as in Normal software,
But great thing i like is -- They are not using flash,
http://280slides.com/ is great web software and this is possible because of new language -- Objective - J and Cappuccino web framework --

Today they have released its framework - http://cappuccino.org/

more at -
* http://cappuccino.org/
* http://ajaxian.com/archives/an-interview-with-280-north-on-objective-j-and-cappuccino
Posted by Narendra Sisodiya at 12:18 AM No comments:

Hi, I am working on presentation technologies so i use to find of many useful web tools.
Using this site you can create presentation online and save in pdf, ppt, odp formats
Totally web based solution. 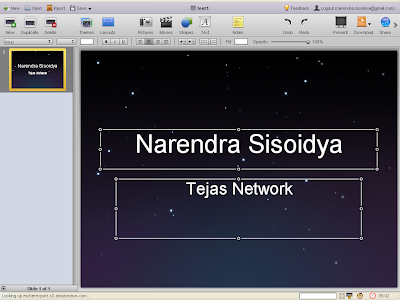 http://tardate.blogspot.com/2008/06/cutting-edge-of-web-applications.html
Posted by Narendra Sisodiya at 4:47 AM No comments: